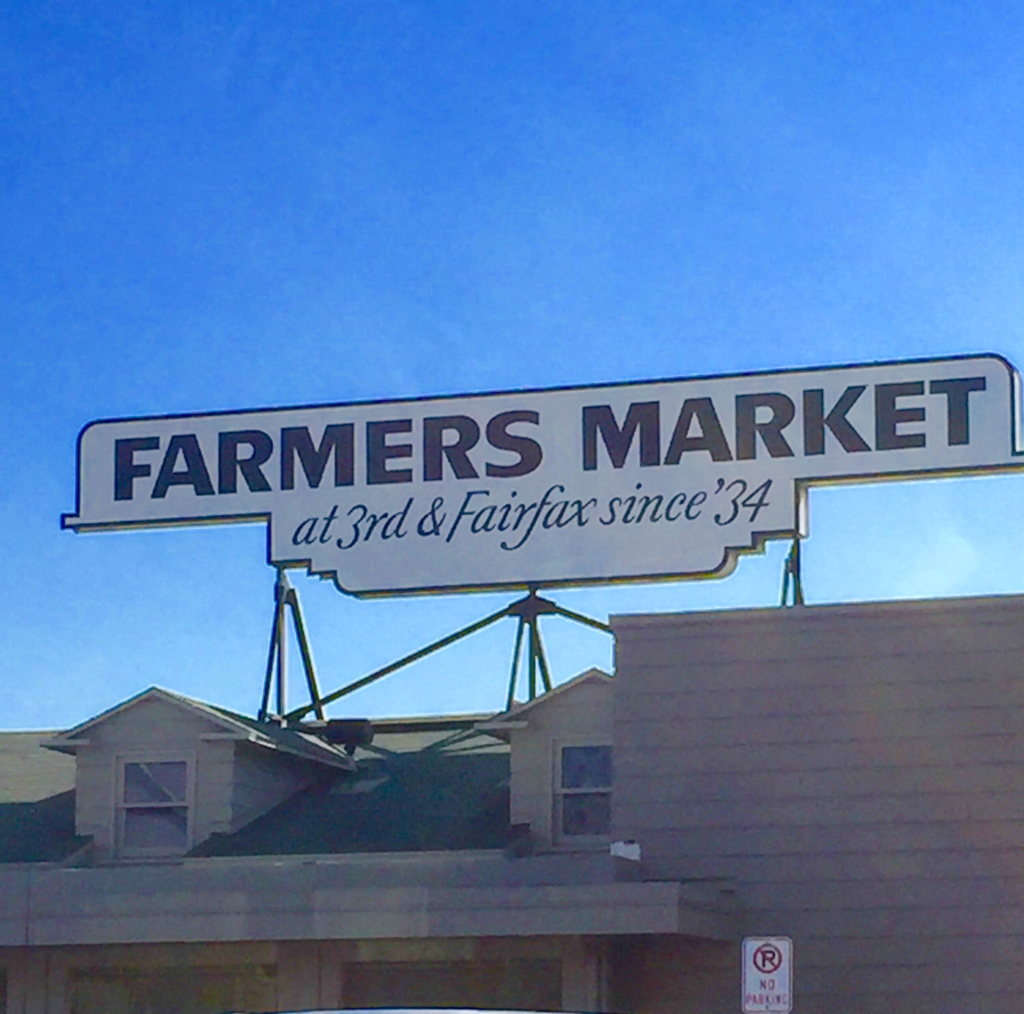 There’s nothing sweeter than crossing an item off your Bucket List.  A recent visit to The Original Farmers Market in Los Angeles allowed me to shorten mine.

The first time I visited was back in the mid 60’s, and I remember the trip from the San Fernando Valley on the 101 freeway with my siblings all crammed into the back of a wood paneled station wagon. As young kids we were not exactly patient, but we knew if we could contain ourselves there would be a prize when we arrived at the market; a famous Dupar’s Restaurant cinnamon roll.

I can still remember seeing the famous landmark Farmers Market sign on the corner of Third and Fairfax, signaling we had arrived at our destination.  The sign still reigns above the market to this day. 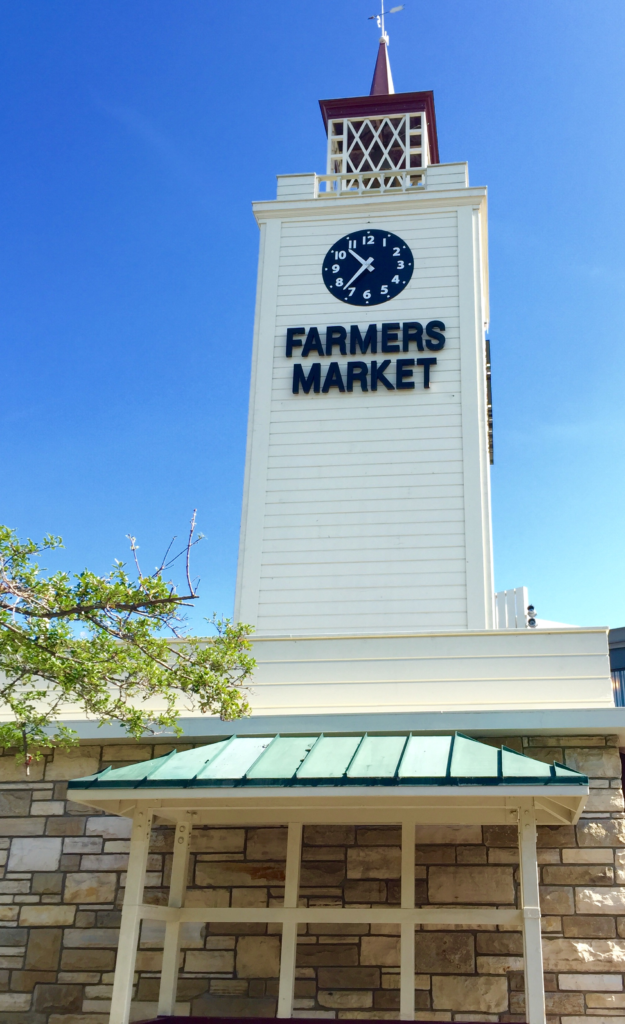 The second landmark of the Farmers Market is the Clock Tower, which has stood proudly over the market since 1948.  Over half a century has certainly changed the area surrounding the Farmers Market, yet still, the market retains its original charm and remains a historical gem.  On this visit, the moment I step foot into the market, I encounter a serious wave of déjà vu. 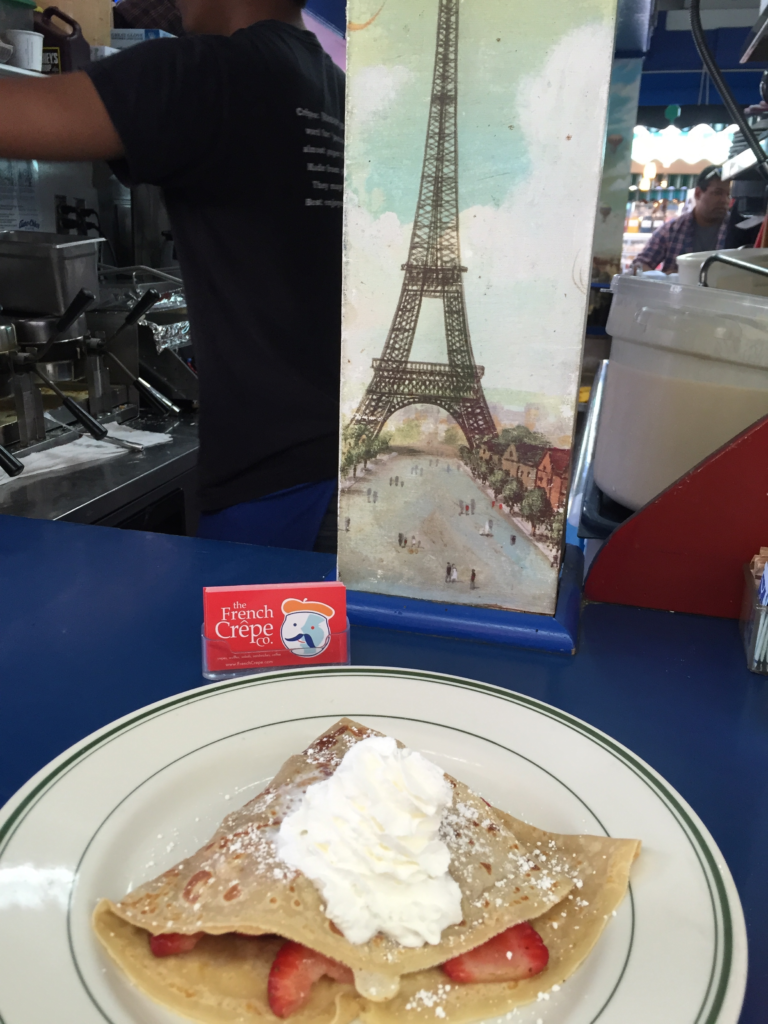 Dupar’s, which still maintains the same space since 1938 is tempting, but I decide this visit, instead of a cinnamon roll, a strawberry crepe will be my choice from The French Crepe Company.  A new memory is formed. 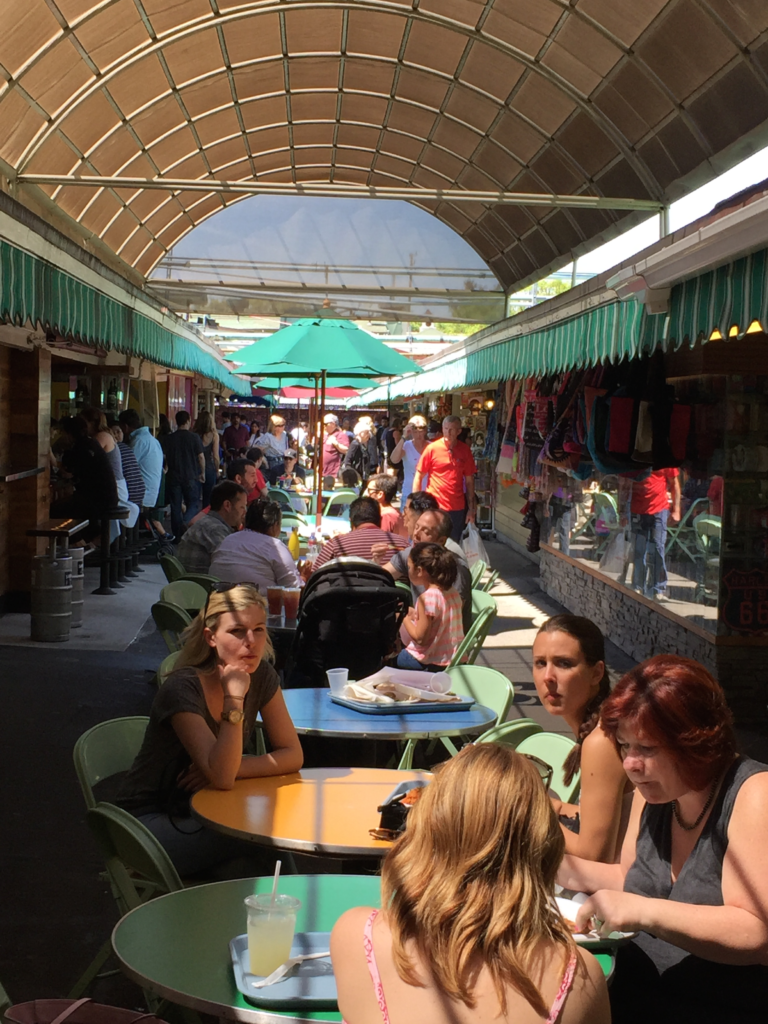 Long corridors filled with numerous food and specialties shops line the market displaying fresh produce, pastries, meat, fish and souvenirs. A kaleidoscope of flavors and scents from the various food stalls beckon to be explored.

The longstanding history of this market surpasses any other in Southern California.  It’s been around for over 80 years in the same location. Starting off in the early 1930’s as a place for farmers to sell fresh produce and groceries, a truck space rented for $.50 a day.  Currently the Farmers Market has over 100 shops and restaurants, and most definitely the rent is significantly higher!  An established LA landmark, the Farmer’s Market sees millions of visitors each year.

The Gilmore Family originally bought the piece of land where the Farmers Market still resides and has used it over the years for various businesses over the years, including their namesake gas station.  The family continues to manage and maintain the property to date.  There is a replica of a 1930’s gas station on the property, allowing a glimpse into the way it was over 85 years ago.

Several tenants have been in the same location for nearly the lifespan of the market. Magee’s Kitchen is the longest standing “food service” tenant at the market, as the family’s matriarch originally prepared sandwiches for the farmers who sold vegetables out of their truck beds on the Gilmore’s property… and this became the genesis for Magee’s Kitchen restaurant!

There is plenty of parking on Fairfax and Third Street, plus an additional easy-to-find parking structure adjacent to the market and new Grove retail and entertainment center.  If you do park in this multi-levelled structure, take your parking ticket and have it validated at Nordstrom’s for free, as the Farmer’s Market merchants will not do this for you.

There are 15 different entrances to the market, and I recommend using either one of the North/South accesses, then go all the way through the corridor and back up the other side of the same corridor.  If you do this with all five corridors, you will not miss anything! 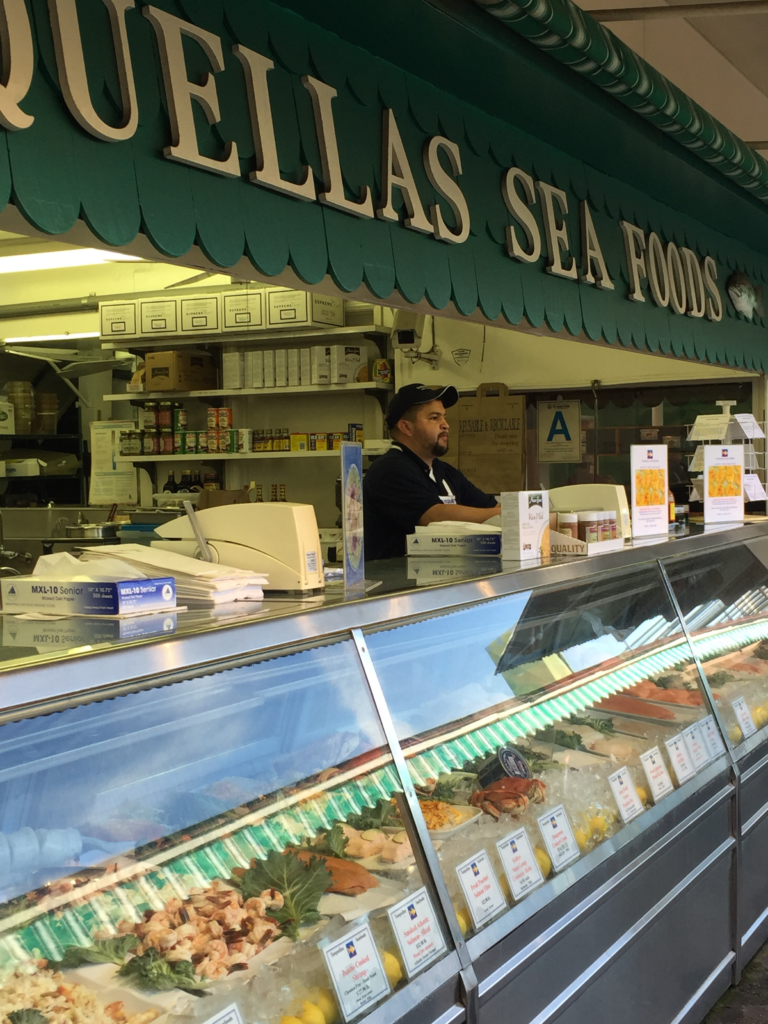 At several of the limited service stalls, like Tusquellas Seafoods, you can select fresh fish and shellfish, including oysters on the half shell, then find a seat at one of the many tables found throughout the market to enjoy your take away meal. Not too far from Tusquellas is Mixology 101, where you can enjoy a craft beer or glass of wine with your meal. 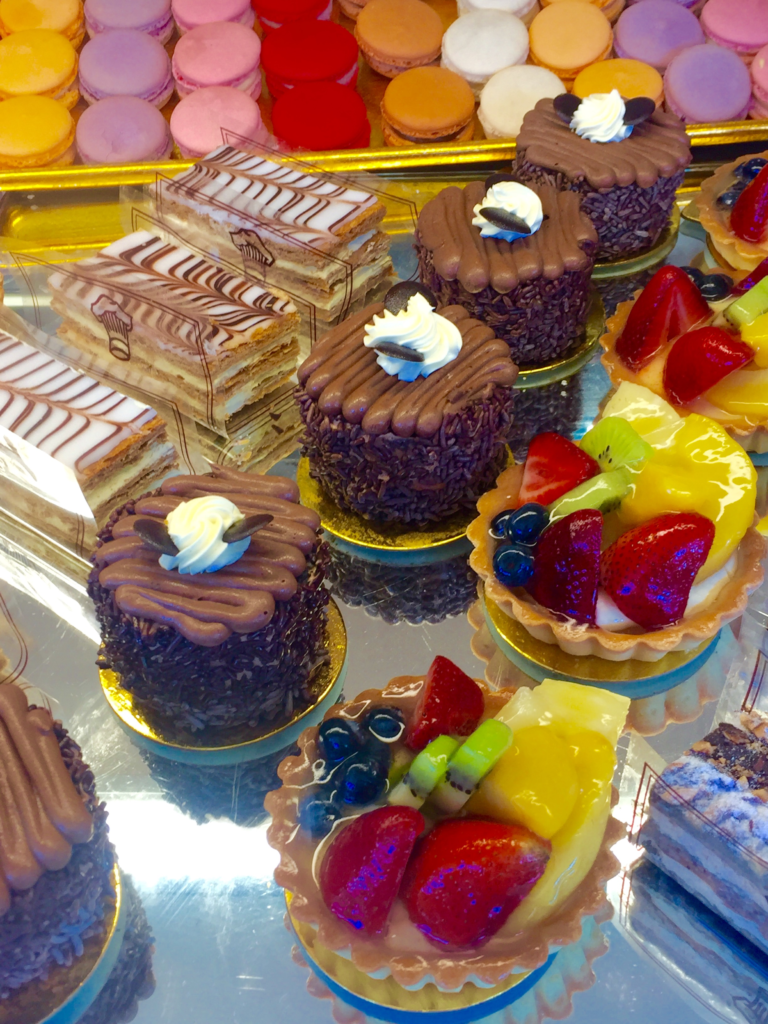 Save room for dessert, as you will have several choices of decadent sweets including cakes, cookies and pastries from Normandie, T&Y Bakeries, or French pastry from Marcel Pain Vin Et Fromage.

Let’s just say you won’t go hungry as there are numerous cultural food offerings at the market! 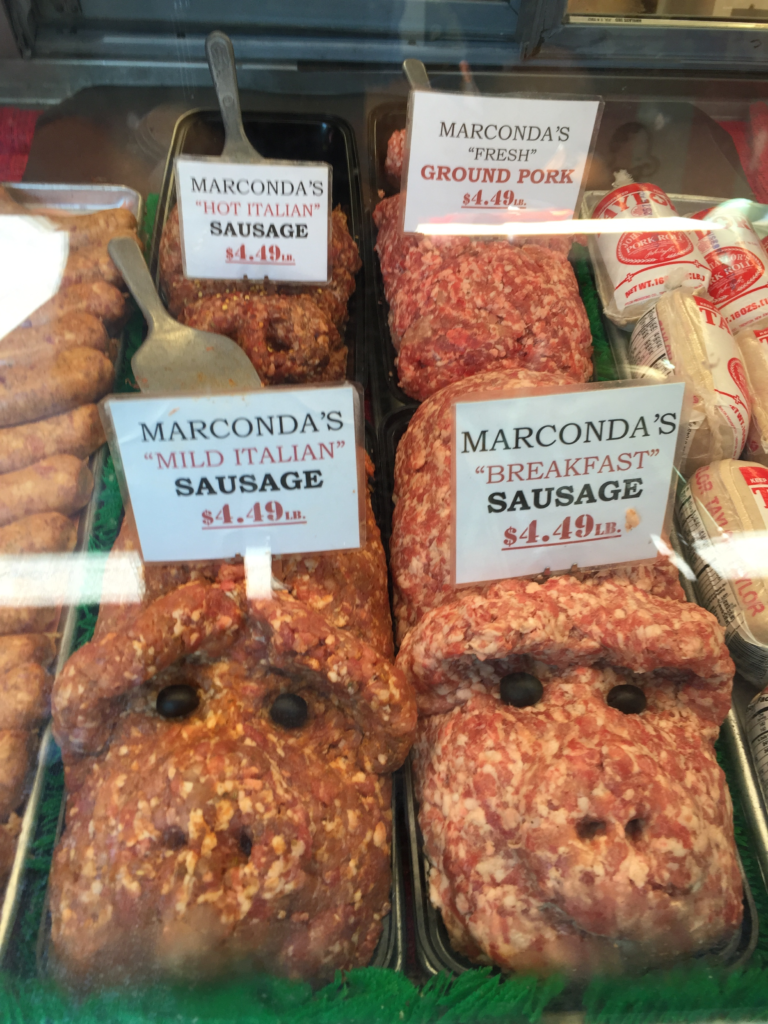 The biggest surprise was finding east coast Taylor’s Ham with familiar Red Cross packaging, at Marconda’s Meats; an item I haven’t seen since I was a kid.  The butcher smiled when I asked if it was the original ham from Jersey, and he grinned, “Yes it sure is, and I am asked that about 25 times a day!”