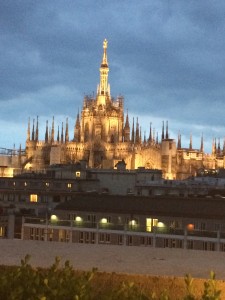 Arriving in the late afternoon in Milan has its advantage and disadvantage; there is far more traffic than one would like after a long traveling day from the USA, yet after settling in at the hotel and taking a seat at the roof top patio restaurant, the bonus view in the late afternoon/early evening is hard to beat!

We were not prepared for the awesome view from the top of the Boscolo Milano Hotel.  In the distance, the Milan Doumo filled the horizon.  Its massiveness seem close enough to reach out and touch.  As the night wore on, a treat unfolded; the Duomo began to light up, slowly at first then feverishly, until the majestic Doumo lit the sky.  It’s one of those unexpected travel moments that will not be forgotten.

Milan was our travel base for the next few days for visits to Lake Como and Lake Lugano, easily accessible from Milano Centrale Train Station, and we included a full day in Milan in the itinerary to see this amazing city.  Zigzagging across this city is possible if you study your intented route and organize the schedule the places you want to see. 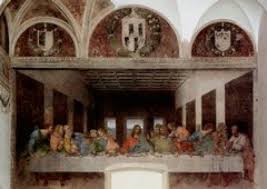 A major downpour to start off the  didn’t stop us from seeing the awesome Last Supper fresco at the Santa Maria delle Grazie. After getting “dehumidified” for 15 minutes, (no easy feat as everyone was soaked from the rain), we were ushered in to the Refectory which has held the fresco since the year 1494. The painting by Leonardo DiVinci is overwhelming in size and extends nearly the entire wall of the Refectory. I stood in awe and was actually moved emotionally.

This 15th century painting is surprisingly in great condition, considering it is housed in a building that was nearly leveled in August of 1943 during a WWII bombing raid. No pictures were allowed so I’m sharing a stock photo! Glad I noticed the small sign as I entered the Refectory stating clearly, “No Pictures.” Also glad I didn’t whip out my camera, unlike the two young American girls being chastised by an older Italian docent who screamed at the girls in her native tounge  to remove the picture they took with their camera. Clearly they didn’t understand until the docent took the camera out of their hands, and with the help of an English-speaking docent, made the girls remove the pictures! 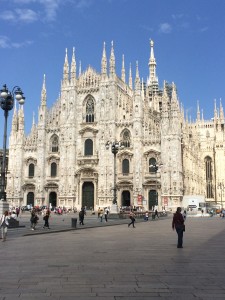 We also visited one of the most beautiful Duomos I have ever set eyes on – the Milan Cathedral. After a thorough tour of the breathtaking interior, we found the booth on the side of the Duomo selling tickets to a self-tour climb to the roof. 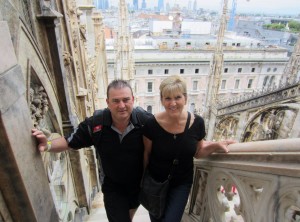 We climbed hundreds of external stairs and reached the top of the Duomo, which provided a million dollar view of the entire city. No one should miss this once in a lifetime opportunity. For goodness sakes, you’ll find yourself standing on the top of the historic Milan Cathedral! 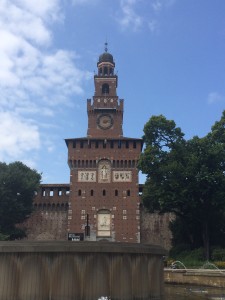 After visiting the Cathedral we walked down the cobblestoned roads past rows of outdoor cafés and upscale boutiques towards the Castello Sforzesco (Sforza Castle). This historic site was almost equally as impressive as the Duomo. The castle was rebuilt from an original structure (raised by the Milanese people in 1447), and brought back to life by Francesco Sforza, the self- professed 1st Duke of Milan in the 15th century. It is an expansive structure that has been used as a palatial residence, wartime barracks, fortress, and today houses several impressive museums situated within the various buildings and rooms within the castle walls. All are worth visiting.

The rest of the day was spent enjoying a bowl of gelato, and graduated to a glass of wine at one of the many outdoor cafes.  Dinner was by recommendation of the hotel concierge, who directed us down an alleyway not too far from the hotel.  The restaurant was clearly a favorite of the locals, apparent from the greetings at the front door.  It was comfortable with a fresh creative menu and local wine!

The walk back to the hotel, through a well lit outdoor mall lined with upscale retail shops and more cafes was perfect in the balmy June night.  The only downside was having to fend off the aggressive rose-peddlers with a very stern repeated, “NO”. 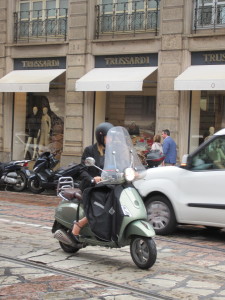 At the end of the day we looked back on Milan with great memories and laughed how we spent the majority of the day trying hard not to get run over by the nutty taxi drivers, trains, and business-suited-high-heeled-female- moped-drivers!!!

It’s fair to say Milan is a vibrant city filled with rich history, art, fashion, and food. We decided 24 hours was simply not enough time to explore this amazing city.

Stay tuned for our trip to Lugano, Switzerland! Ciao!